The History of Mud Creek Club

The creation of this book has been a labor of love for all associated with the Mud Creek Club. We felt that the history and beauty of this place deserved to be recorded for future generations. The project took the better part of a year to complete, allowing for the capture of each of the four seasons.

The magnificence of the property, marsh and Lodge has been portrayed photographically in full double page spreads and individual vignettes. Quotes from the original log book dating back to 1877 tell the story of great times and camaraderie. This historical record will forever capture the essence of what makes the Mud Creek Club such a wonderful place. 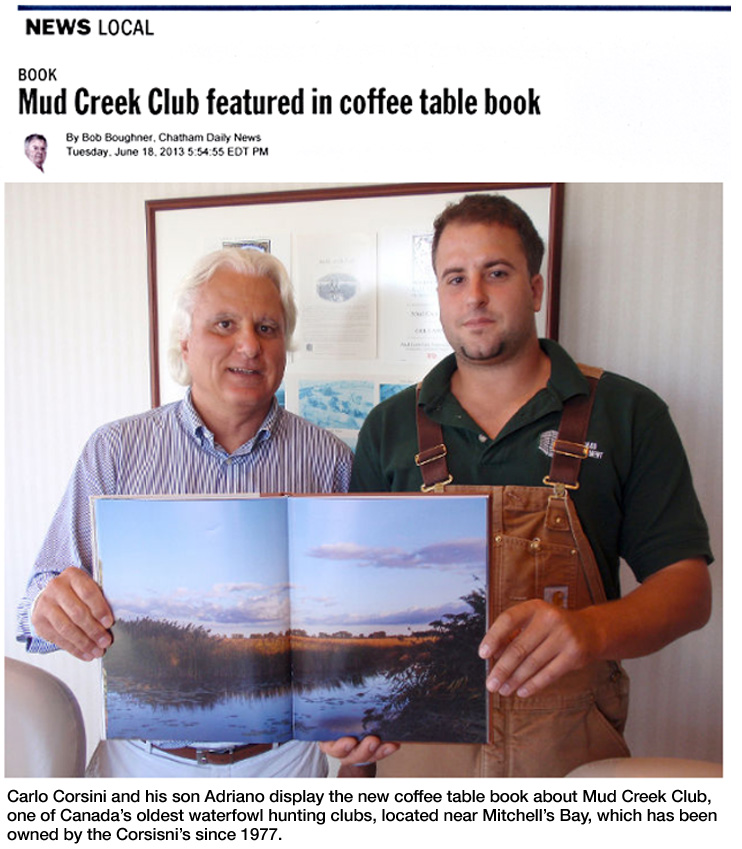 More than 150 pages of colourful history, photographs and people associated with one of Canada’s oldest waterfowl hunting clubs are featured in a just-released coffee table book. Carlo Corsini and his son, Adriano, helped compile the book about Mud Creek Club near Mitchell’s Bay in memory of its former owner, the late Sileno Corsini.

The pages of the book, which was more than a year in the making, feature magnificent marsh scenes, waterfowl hunting photos and even a photo of a full moon over Lake St. Clair. The club, considered a “jewel in the crown” of Canada’s hunting destinations, was owned for years by the late Henry Ford II before selling to Sileno Corsini and his partners in Italy in 1977. Among the many guests who have hunted at the club over the years has been U.S. Air Force Lt. General and former NASA astronaut Thomas P. Stafford. “First and foremost, I’m dedicating the book to my father who had the vision and insight to purchase the magnificent property in 1977 and continue the tradition of the past, that being hunting,” said Carlo. He said that by applying the comments of the guest book throughout the years, accompanied by many photographs – some taken by his son Adriano – readers could get a taste of the camaraderie that has been the most important part of the club.

Corsini designed the book with the assistance of Wayne Perdu and Anita Markert – the latter two are also responsible for the many photographs in the book. The pages of the book tell the story of how the club and 2,200-acre property have been refined over the years, from the new lodge built by Henry Ford II in the 1960s to the draining of a portion of the marsh to allow for farming. The private club offers an amazing hunting experience, world-class cuisine and top-notch facilities. The guest book at Mud Creek Club was first introduced in August 1877. Its original purpose was to log the number of birds taken daily by the sportsmen, Its first entry lists four breeds of ducks – black, wood, redhead and blue bill. The sportsmen of the day were Chris Northwood with five and J.B. Stringer with seven. By the second season, entries included a record of trapping by the keeper who, with a total of 100 traps, was able to capture 402 muskrats and mink. By 1881, the hunters themselves were entering their activities, although it wasn’t until 1884 that the first personal comments appeared. “Soon thereafter visitors were recording their thoughts not only about the club and the hunt but about the camaraderie and the hospitality, a tradition which continues in the original guest book today.”

In his letter to the late Sileno Corsini and his wife when taking over the lodge, Henry Ford II wrote: “I let go with some regrets for I derived a great deal of pleasure from it during the years that I owned it. However, there is a time and place for everything and I think it was time for me to move on.” Ford thanked the new owners for keeping staff members Ruby and Bud, adding, “you will find them both very competent and devoted. They were important factors in my use of the property and I could not have managed without them.”

Carlo Corsini also pays tribute to his mother, Maria, who played a vital role in the success of the club’s renowned hospitality and cuisine. “After spending time in Italy at a prestigious cooking school she returned to create an amazing menu of mostly Italian dishes,” wrote Carlo. An official book launching is planned this summer for “this special place,” said Carlo He said Adriano is preparing to take on the role of caretaker “of this special place and will continue to enjoy this great property with the next generation of guests that are fortunate enough to come here.”

Below are page examples from the book.